From start to finish

May 16, 2016
I thought I'd chronicle how a simple sewing project goes for me, from beginning to end. For those of you who don't sew, I'd like you to know that if I can do it, anyone can...seriously. And for those of you who do, I thought you might get a kick anyway of how a newish sewer does it:D
(As a reference, I've been sewing since the end of August 2015.) 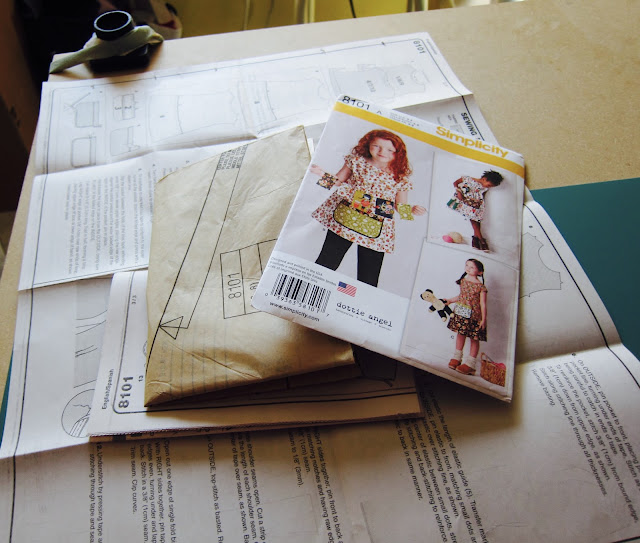 2) I trace the pattern pieces into this paper, so that I can re-use the pattern again. (A pattern envelope contains pieces for different sizes, and especially for kids' patterns, you can keep re-using them until the child gets too big:D) 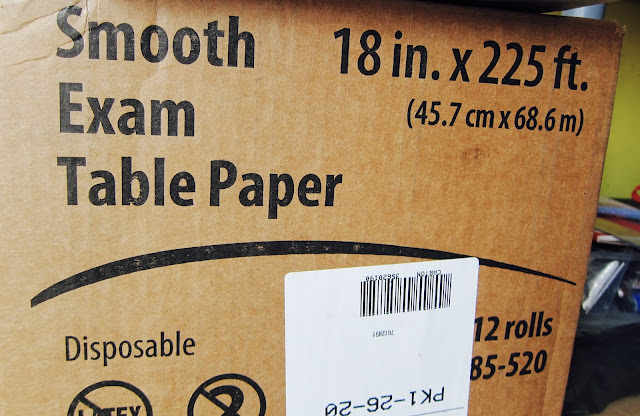 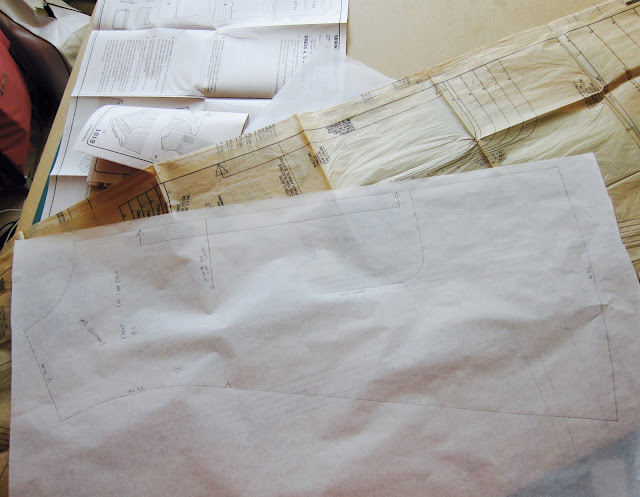 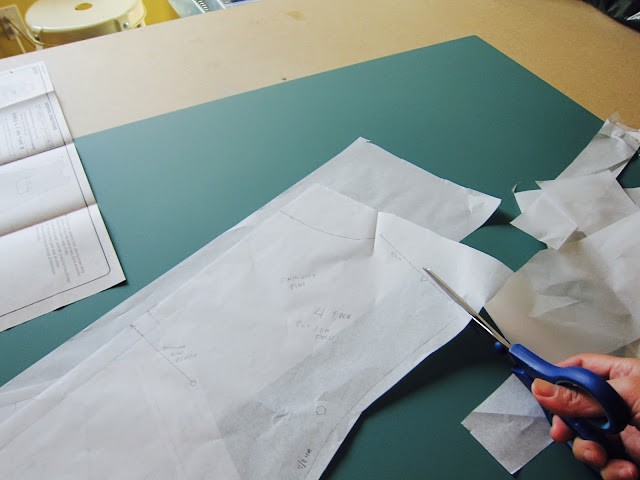 3) I then put the pattern pieces on top of the fabric, usually folded with right sides together (for the bigger front and back pieces) and cut on the straight grain. I didn't bother ironing the fabric after pre-washing it with this project, but this is a no-no. I just got lazy.
I then transfer the markings into the fabric.
4) Once you cut the pieces, the fun part comes...the actual sewing! 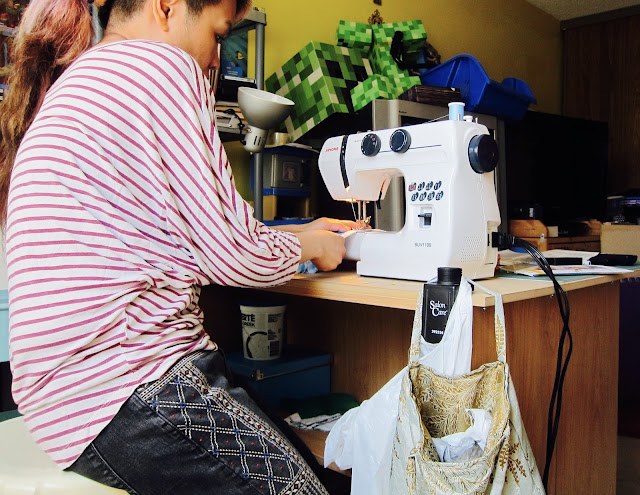 5) The one thing I don't get lazy on: pressing the seams. 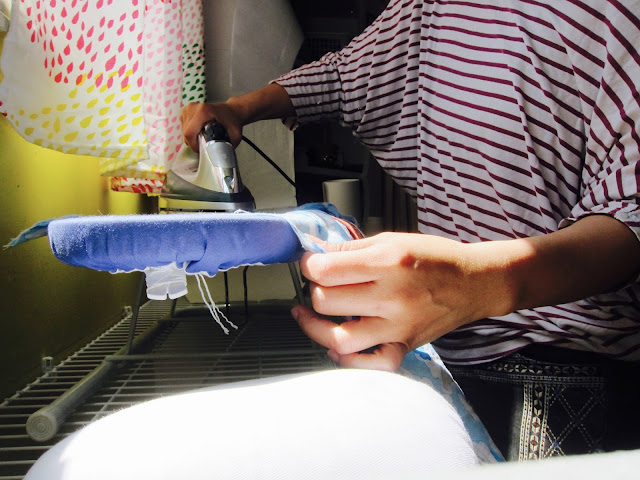 6) And after the sewing and pressing...voila! A finished garment:)

I guess this is really simplified, you guys, as this is a garment for my little one. For adults, it can get a bit more complicated with sizing adjustments and such, but that's another story. These steps also were not done in one day, as I usually do my crafting in spurts...hehe.... 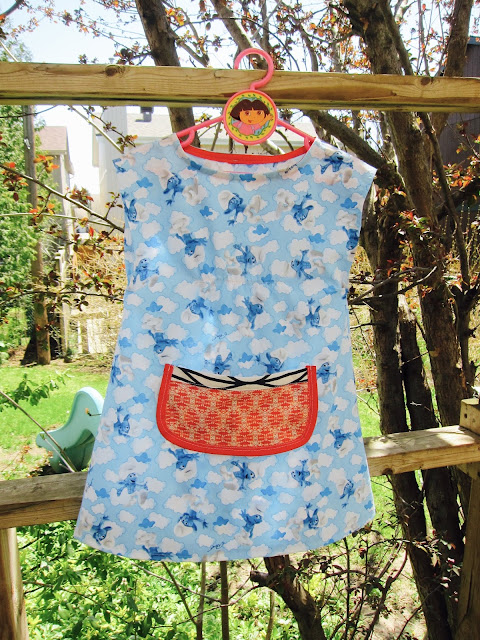 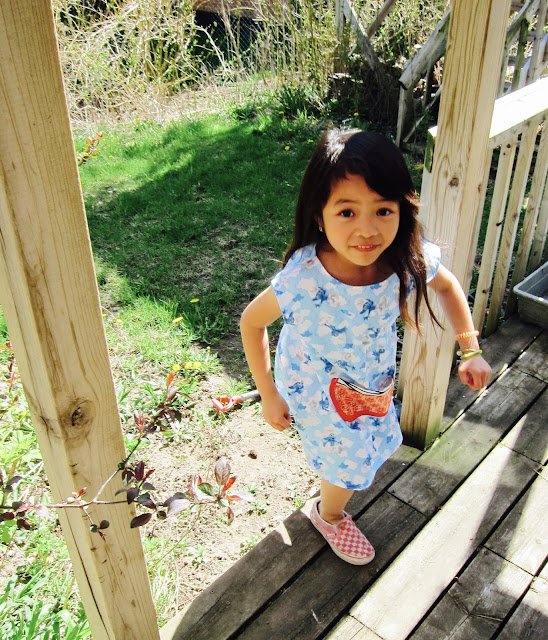 What kind of crafting do you do?
sewing

It is funny but these days I am trying to learn how to sew simple thing, like bags or little wallets ;)

Rowena @ rolala loves said…
I love seeing your creative process Emmy and that dress looks super adorable on your daughter! I've been wanting to learn how to sew for the longest time and maybe I'll sign up for classes soon.

I'm glad to hear you're enjoying My Love From Another Star so much. I didn't really care for it since employs a lot more of conventional K-drama cliches but it's probably all still fresh to you since you haven't watched many of them. Sometimes I wish I still had fresh eyes like that ;p You can also probably guess how much I like KSH and JJH by the number of times I've featured them XD
May 16, 2016 at 10:22 AM

Beauty Editer said…
Love this! I like your photos so much. :)


and I assume you've seen Book of the Stranger already


RIP Osha. I saw that coming as soon as she reached for the knife.

Seems Jon will get help from the Vale adding to his tiny wildling army. Imagine if he got help from the Iron Islands, though I suspect they'll head to Essos with Dany as I hear that's what's already happened in the books. They might get some help from the Riverlands if they someone can overthrow Walder Frey.

I was honestly expecting Dany to open the door and be like "Drogon bitches" and have him turn the room on fire. I'm guessing she laid some kind of flammable liquid on the ground. Typically stone doesn't burn like that.

A Very Sweet Blog said…
Your process works Emmy! Girl, I can't even cut a straight line >.< I was horrible when it came to art & crafts. God did not bless me in that department. I did a little cross-stitching at one time. But then I got bored with that. There's no hope for me. LOL
http://www.averysweetblog.com/
May 16, 2016 at 12:53 PM

Shireen L. Platt said…
I remember when I was a child, my mum used to sew me clothes too, well a couple of them. She has the tendency to follow and do something that all her friends are doing and then her interest fizzles out after a couple of tries. LOL!

You are really talented, Emmy, your little ones are so lucky to have a cool mum like you.

Oh to Be a Muse said…
Great simple tips. And the dress is so cute on her! I had no idea that you needed to press the seams.

Anonymous said…
I love sewing and knitting. I learned at a very young age but I haven't done any projects in a long time. I love the dress it's so cute.
BEAUTETUDE
May 16, 2016 at 7:43 PM

sonia // daring coco said…
I honestly can not believe you are a newbie to this? WTF! I thought you'd been doing this for years, probably even came out of the womb with a sewing machine in hand bahahaha! This is incredible. I tried this all once, at school and OMG it was a disaster. I love how much faith you have in us that anyone can do it, and maybe I could. I might give it a go one day... MIGHT!

June said…
Wow! It was nice to see your sewing process! I really want to buy a small machine because I always have tons of alterations and modifications for my clothes! Great job on the dress! It looks adorable on the cutie!
xx
www.junewantsitall.com
May 17, 2016 at 8:19 AM

Vanessa said…
Loved seeing the process from start to finish, and she looks so cute in her little dress! You make it look like I can possibly get into sewing again one day. I never learned the proper way, I always rushed through it. :P
May 17, 2016 at 11:28 AM

Fashionably Idu said…
Wow wow, this is awesome. I loved seeing the project from the onset till the end. I do know how to sew but you haven't done it in a long time. Case of if you don't use it, you lose it. I so love the pocket. Honestly i should invest in a sewing maching and cut back on trips to my dry cleaner for alterations. Great job Emmy and your lil girl is OH SO CUTE!!!!

BABALUCCIA said…
Pattern and finished handmade ...fantastic work I like handmade work too
have a nice day
To me new post
babaluccia.blogspot.com
bloglovin