1)Bird Box
I am one of those who totally loved this Netflix film. A lot of critics didn't like it stating it was predictable...blah blah blah....but I thought it was a good suspenseful movie. Two thumbs up:)


2) Brooklyn Nine Nine
Ok...ok....I know I'm late when it comes to watching this show, but I totally get the hype now. This is such a comedy gold, you guys. Love the whole cast, and was literally in stitches in some of the episodes. Almost done with Season 2. So happy NBC picked up this show after it was cancelled!

I was also so proud of how Andy Samberg and Sandra Oh hosted the Golden Globes.:)

3) Aquaman
This, like Bird Box, was one of those films that was just entertaining from beginning to end. Not the best story line but hey, James Wan tried to pack in as much as he could in a span of 2 hours.

Not a big fan of Amber Heard, but loved the rest of the cast, especially Nicole Kidman and Patrick Wilson.

4) Laura Mercier Lip Glacé in Rose, and NYX Liquid Suede in Sandstorm
I am currently using the sample of this LM gloss and loved it so much that I ordered the full size.
I think this would look good on almost all skin tones.

I've been paring it with the NYX sometimes (Sandstorm is a great nude lip colour for my skin tone). 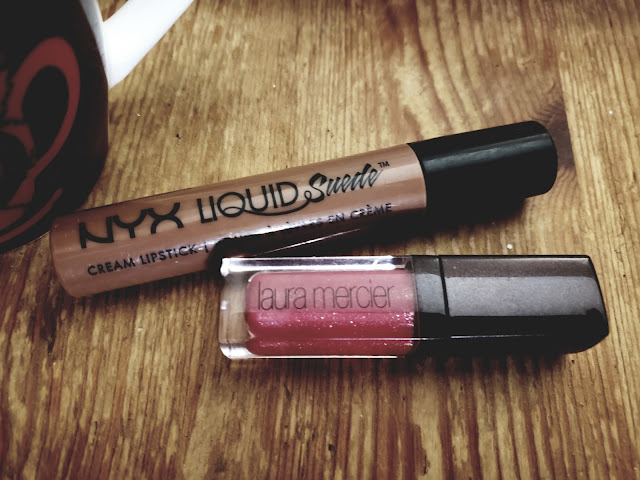 Have you seen any of these films/show lately? Are you a Laura Mercier fan? It's seriously one of my fave brands when it comes to makeup.
currently loving

TheNotSoGirlyGirl said…
YAASSS! love everything in the post!
have you seen black mirror interactive movie? it's AWESOME!

cool blog babe! I'm follwoing and I would love if you could follow me too =)
xoxo

Marisa Cavaleiro said…
Hi Emmy
I confess I don't have the patience to watch movies and series.
As for Laura Mercier gloss I don't know the brand, but Nyx has many fans in Portugal.

Rowena @ rolala loves said…
We might watch Birdbox at some point but it's not high on our list. We've been reliving some of our fave classic K-drama moments with clips of Delightful Girl Chun Hyang and rewatching Full House. Laura Mercier makes nice makeup but I can't stand NYX lip products because they smell so noxiously bad ;p
January 8, 2019 at 3:58 PM

the creation of beauty is art. said…
Everyone has been talking about Bird Box so I decided to watch it. Oh my gosh, it was really good! Very suspenseful. I think they did such a great job with it. I haven't seen Aquaman yet but I'm glad to hear it was entertaining. I love Amber Heard, so I am hoping to see it soon!
the-creationofbeauty.blogspot.com
January 8, 2019 at 7:21 PM

Mica said…
I love Brooklyn 99! I just wish I had more time to watch it, haha! It's definitely my kind of show. I got scared reading the synopsis of bird box so I know it's not for me, haha!

Hope that your 2019 is off to a good start and you're having a lovely week :)

FASHION TALES said…
Birdbox wasn't in my interests but maybe we shall give it a try. I feel the same about Amanda Heard acting-wise. I love Andy Samberg! Thanks for the list! Oh, and Happy New Year! x/Madison

Your Invisible Crown said…
Dropping by to say 'hi', hope your holidays were fun, and you're off to a good start of the year! I love Brooklyn Nine-Nine, mostly I'm not that into comedies, because I think most of them are trying to hard, but I absolutely love this show. Have you seen Master of None? I liked that one too.
January 10, 2019 at 6:45 AM

sonia // daring coco said…
I had no idea what Bird Box was, when it was released their was an INFLUX of memes and honestly I felt like I was sleeping under a rock hahahaha! I don't have Netflix so yeah, not sure if I'd watch it since it's gotten a lot of hate.

Miu said…
I also love Brooklyn Nine-Nine. I wanted to support them so that the show won't get cancelled and buy the DVDs of the existing seasons, but it seems that they aren't even released in German yet 😕 I want them in German because it's more relaxing and I get more jokes 😁
January 15, 2019 at 10:15 AM